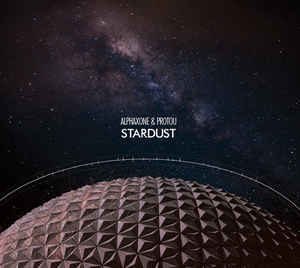 Background/Info: “Stardust”-album resulted from the common efforts of Mehdi Saleh (Alphaxone) and Sasha Cats (ProtoU). It also is the meeting between one of the Iranian masters of dark-ambient and the Ukrainian Princess of dark-ambient & space music. The work reveals 7 tracks.

Content: “Stardust” comes closer to a dark soundscape format instead of traditional dark-ambient music. Mixing echoing noises and fragmented voices lost in a surreal space, the tracks reflect dense and obscure sound layers although mixed with some evasive passages.

The tracks have been meticulously built up, creating a fantasy-like sonic cataclysm characterized by compelling sound waves. A few iron-like noises empower the icy flavor recovering this opus.

+ + + : Alphaxone & ProtoU is a real interesting match between the oppressive dark-ambient style of Mehdi Saleh and the more evasive approach of Sasha Cats. Alphaxone became an established and renowned artist while female artist Sasha Cats definitely is becoming one of the newest sensations in a genre dominated by male musicians. “Stardust” is one more release between label mates, which becomes a trademark of Cryo Chamber. Musically the debut part of this work is absolutely worthy of examination and definitely an interesting experience, which I hope will be renewed.

– – – : My only reproach is that Cryo Chamber became a real prolific label –which is a positive evolution, but the releases are progressively sounding a bit too similar to each other. I’m missing a real climax on “Stardust”.

Conclusion: “Stardust” is an interesting meeting between artists hailing from different cultures, but sharing similar sonic interests. The album confirms the talent of Alphaxone and the growing potential of ProtoU.