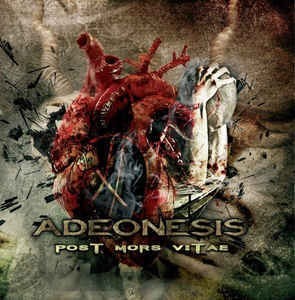 Background/Info: Adeonesis is Wilger Rodrigo Humerez Rios and his brother Ferry Humerez Rios. I discovered this Colombian formation now 4 years ago when they released their official debut-album “The Rite Of Our Cross”. The album was already released on Advoxya Records and revealed a great potential. Adeonesis is now back on track unleashing 9 new tracks plus 3 other new cuts featuring other artists and 3 remixes.

Content: “Post Mors Vitae” sounds as a classical dark-(h)el(l)ectro opus carried by haunting leads and driven by a furious dance cadence. The vocals are heavily distorted and the lyrics are nearly impossible to understand. “Post Mors Vitae” rapidly moves into a sonic capharnaum although accomplished with some polished and melodic sequences.

The devilish tempo remains constant and you’ll find no break on this album. Adeonesis also composed a song together with Alien Vampires, which is a real reference in this kind of music. The featuring of Reaxion Guerrilla sounds even better and the song featuring Stahlnebel & Black Selket also is an attention grabber.

The remixes have been accomplished by great names from the dark-electro scene. You’ll hear Xentrifuge, ES23 and A7ie.

+ + + : You’ll not be disappointed with the new Adeonesis album if you’re fan of extreme dark-electronic experiences. This band sounds hard and their songs are merciless. The ghost-like vocals reinforce the haunting and desperate atmosphere hanging over the songs. But the production is not only into power, but still reveals great, refined arrangements.

Among the remixes I would especially recommend the job done by Reaxion Guerilla and Stahlnebel & Black Selket.

– – – : The main –and maybe single, point that hurts is the similarity between all songs. Don’t get me wrong, I like this opus, but once you’ve heard a few tracks you know what will come next, which makes it all a bit too predictable. I expected a bit more out of the remixes.

Conclusion: This album has been visited by evil forces and has the power to lead dance floors to ecstasy. Hell has been never that tempting to visit!

Best songs: “Addicted To Your Pain”, “Beyond Our Fears”, “The Taste Of Your Blood”, “Under My Instinct Murdered – Alien Vampires vs. Adeonesis”, “Fuck You Religions featuring Reaxion Guerilla”.