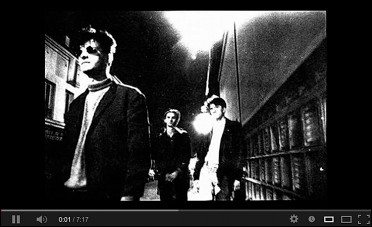 This 80sObscurities was founded by DJ Rexx Arkana to showcase old, often unknown or forgotten acts and tracks from the decade when electronic music was truly the new wave. Rexx Arkana has been a club/radio DJ and promoter since the mid-80s and headlined festivals on several continents and currently holds a residency at DEFCON, NYC’s current longest-running weekly scene party. He is also the founder and lyricist of Brudershaft and one half of harsh electro act FGFC820.
Another day, another 80sObscurities feature for all of you beautiful people. Our 80s artist du jour is fabulous French band Little Nemo. Formed in 1983 by Olivier Champeau (vocals, keyboards) and Vincent Legallo (vocals, guitar) and named for the titular character in character in American cartoonist Winsor McCay’s “Little Nemo in Slumberland”, the band created music that ran the gamut from gothic ethereal to new romantic to dark wave. (Their final album, 1992’s “The World Is Flat”, was misdirected, quasi-commercial pop rock that didn’t register well with their target audience – whoever that might have been – and has been largely discredited and discounted by the band’s fan base.)
They debuted in 1986 on a split cassette with the band Rain Culture, who promptly disappeared immediately afterwards. While the production of their self-released first album “Past and Future” (also issued on cassette) left a lot to be desired, forgivably, Little Nemo’s compositions showed significant promise. In 1988, they were joined by Nicolas Dufaure on bass and after again issuing another record on their own – the “Private Life” 12” – the band signed to esteemed indie label Lively Art. It was through this association that Little Nemo achieved their most widespread success.
They, along with label mates Asylum Party and Mary Goes Round, defined what became known as the “Touching Pop” movement, a musical style categorized as much by how it made the listener feel as by any mode of composition or instrumentation. The movement was a fleeting moment in time; by the early 90s, each of those bands – and the label itself – faded into oblivion. Champeau would rechristen himself as “Doctorolive” and maintain a level of visibility within the techno and house scenes through the middle part of the last decade, but today’s track – the 1990 version of a song that first appeared on the band’s 1987 debut – shows the artist at his 80sObs apex. Bon appetit!