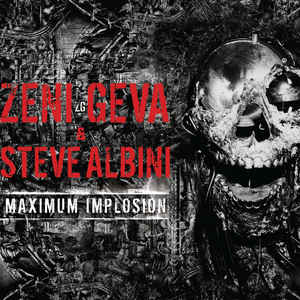 Background/Info: This project is the unexpected meeting between Zeni Geva (aka KK Null) and Steve Albini (Big Black). Both of them got involved with music during the 80s, but clearly belong to very different scenes. But music is connecting people and both artists released the album “All Right You Little Bastards!” in 1992. It’s a live recording that has been re-mastered for this album (2nd disc). The main disc entitled “Nai Ha” was recorded in 1992 as well and was also remastered.  Two bonus tracks were also added.

Content: What can you expect when a master of noise (KK Null) joins hands with one of the post-punk/industrial pioneers (Big Black)? You get a merciless and tormenting sonic assault on, which you perfectly recognize, the input of each artist. The typical harsh and very unique guitar play by Steve Albini creates a perfect cacophonous harmony with the noises and screams of Zeni Geva.

The first disc is pure noise-rock while the second (live) album is a little bit more accessible, but especially bringing the live atmosphere alive.

+ + + : This double album is a real opportunity to (re)discover this common project between opposite artists hailing from very different cultures. The sound and experiment is extreme, but definitely something apart from established projects. Both artists clearly had some fun creating one of the most unexpected sonic fusions, which I guess sounds more Japanese-like than American and/or European.

– – – : Noise-rock is something extreme and hardly accessible for music lovers who aren’t familiar with this kind of hardcore sensation. I personally prefer –and especially Steve Albini, to hear both artists involved with their other projects.

Conclusion: This work might be defined as ‘apocalyptic-death-industrial-noise-rock’. It sounds a bit different from the usual productions released on Cold Spring, but this label clearly doesn’t scare to enlarge its sonic horizon!