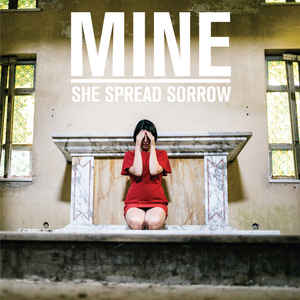 Background/Info: Italian female artist Alice Kundalini released her first solo-album “Rumspringa” in 2015. “Mine” got released in 2017 on vinyl format featuring 5 songs. This year we welcomed the third opus entitled “Midori”. So this is a re-release of the “Mine”-album, which has been now released as CD format featuring 2 bonus cuts.

Content: Alice Kundalini likes to work around concepts, “Mine” being inspired by ‘dark rooms of an abandoned college, where whispers and obscene thoughts mingle’. The ‘concept’ has been masterly illustrated by the artwork on, which you can see Alice with a somewhat college-like red dress at different places of this abandoned college.

The music, which is mixing elements of industrial-ambient- and death-industrial music are perfectly evoking the atmosphere. The tracks are disturbing and in a way, perfectly symbolizing the imaginary horror the walls of this college have seen.

+ + + : I have to admit I really fell in love with the music of She Spread Sorrow. Kundalini creates a very intimate atmosphere with disturbing sounds and noises. Is she an angel or a demon? The answer is probably somewhere in between, but she clearly is an artist with a very own sound approach. The compositions are rough and yet subtle. “Mine” stands for an inhibited production, where ‘noises’ are getting something authentic. The whispering vocals accentuate the torment emerging from this abandoned place.

– – – : While “Midori” is without a shadow of a doubt the most ‘accessible’ work of She Spread Sorrow, you rather will recognize the sound experimentation featured at “Rumspringa”. It’s hardly accessible, but you really have to take your time to seize the precious work of this artist. Both bonus cuts don’t really sound as the most significant tracks of the CD version.

Conclusion: She Spread Sorrow sounds a bit as an alien moving in a wider mass of industrial artists. “Mine” has something apart and unique.

Best songs: “Straight Back”, “Crushed On The Pillow”.