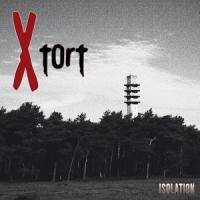 Background/Info: The name of this formation from The Netherlands will probably remind you to the “Xtort”-album released by KMFDM in 1996. I’m not sure the band has been inspired by KMFDM, but it consists of a project that has been set up by members of the industrial-metal minded HOER. Xtort wanted to move on industrial paths, but with some extra new-wave elements instead of metal music. After 3 EP’s they now have unleashed their debut full length revealing 10 songs.

The vintage aspect of multiple sounds and global arrangements is a quite noticeable element. The work is pretty diversified and even into rather classical dark-electro music featuring vocals à la Claus Larsen (cf. “Seele”).

+ + + : I like the approach of Xtort of composing a dark-electro inspired sound with some harsher industrial elements on top. The retro-approach is quite exciting.

– – – : The global production sounds rough and unpolished, which might be voluntary, but it not exactly sound professional. Some of the vocal parts are not that passionate and powerful enough although a few tracks clearly reveal more rage and passion.

Conclusion: There’re a few good elements running through this work although I expected much more from this band, which already has a lot of experience.