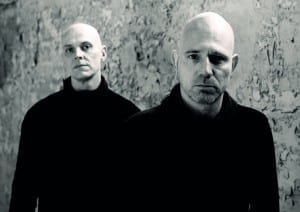 De/Vision is a veteran of the synth-pop scene, which was set up at the end of the 80s. The band’s great break through happened rather instantly after the release of their debut album “World Without End” (1994). De/Vision progressively went on unleashing new impressive productions, rapidly becoming one of the leading formations in their genre. Steffen Keth and Thomas Adam both remained the single members on board. De/Vision experienced with new sonic ideas and their newest opus “13” (released on Popgefahr Records) definitely sounds as one of the most progressive albums from their impressive discography. It remains pretty synth-pop minded, but accomplished by raw and somewhat industrial sounds. The right opportunity for a chat with Thomas Adam.

Q: It took you a few years to achieve the new studio album “13”! How does it feel to be back on track and what kind of album is “13” all about?

Thomas: In fact, it took us 4 years…”Rockets & Swords” was released in 2012, afterwards we toured extensively. Including the song-writing process, the production of the new album took about one year. It was a stressful year, but the hard work paid off. We are absolutely happy with the result. When we started working on the new album, one of our producers, Ken Porter, said that he wanted to make the best De/Vision album ever. In my humble opinion he reached that goal. “13” is a very diverse album that includes everything from soft to edgy tones, great song-writing, catchy melodies, in addition to excellent sound design. For lovers of electronic music “13” is a must-have.

Q: What have been the main sources of inspiration on “13”?

Thomas: Our music and lyrics have always been a reflection of our own lives and the world we live in and right now we’re living in very dark and dangerous times. International political issues had a strong influence on “13”: terrorism, religion, war, the huge number of refugees Europe is facing and how we handle this situation and in this context the upcoming nationalism in Europe and much more…

Q: I’ve been deeply impressed by the sound production revealing multiple ‘raw’ and yet pop-minded sounds. Tell us a bit more about the tricks you have used to create your sounds?

Thomas: I’m glad you mention this because creative sound design always played an important part for us, not only in our music, but in electronic music in general, but many people, especially music critics, seem to forget that at times… The sound design is definitely one of the highlights of our new album. Our demo songs sounded pretty good already, but the time, effort and expertise our producers Ken Porter and Stan Cotey have put into the sound design can’t be too highly praised. They have done a fantastic job in creating fascinating and diverse sound landscapes, giving each song a distinct note. I can’t tell you in detail what exactly Ken and Stan did or what kind of instruments or Plug-ins they use (they actually live in the USA and we didn’t meet during the production of “13”), but what I can tell you is that Stan owns an old modular synthesizer, which was used intensively…

Thomas: It is comparable with growing up… first you gotta learn how to crawl before you learn how to walk and I guess today we’re a mature, grown-up band with an extensive experience of life. It took a while before we knew who we are and what kind of band we wanted to be. Musically we have always tried to re-invent ourselves every once in a while and we have never been afraid to break new ground. Today De/Vision is not only a synth-pop band. If you ask me, the typical De/Vision sound is very hard to describe, it changed a lot over the years. We never wanted to get stuck in some kind of routine. “13” is a very good example for what I just said. A song like “Their world” is a typical synth-pop song with fantastic melodies, songs like “Gasoline” or “Who am I” are rather edgy, almost industrial-like.

Q: You can look back at a phenomenal career, but is there one ‘dream’ and/or ‘big thing’ you still want to realize?

Thomas: I don’t know what Steffen’s answer would be, but I would love to play a show in Japan one day, but I guess that will never happen. Nobody knows De/Vision in Japan and we’re still waiting for our big breakthrough but that’s another story…

Thanx for supporting us.