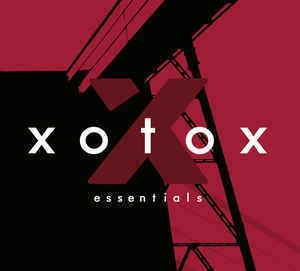 Background/Info: Andreas Davids set up Xotox during the late 90s. When future-pop music was dominating DJ-sets and alternative charts, Xotox created a solid and efficient antidote called ‘industrial for hyperactive people’. Dancefloors got infected by a dangerous sonic virus, which was not that really new, but people simply liked it. “Essentials” is a great look back to the impressive discography of Xotox featuring 2 discs and 35 cuts.

Content: The real break-through happened with the real official debut album “Lichtlos”. I think there was no better way taking off with this heavy electro-distorted piece of industrial music. A harsh, stumping cadence directly leads into frenetic moves while electronic sequences add an extra frozen touch to the already tormenting atmosphere. This song (and album) was a solid basis for the sound of Xotox.

On one side we get this electro-industrial mixture, but on the other side we get an even darker and especially more industrial-orientation. Some tracks in the genre even reminded me of Esplendor Geometrico and I especially refer to “Ritmo Diabolico”, which is a rather recent song.

The industrial sound formula created by Xotox always remained pretty danceable as well, which explains the popularity of the band by DJ’s. It sometimes comes pretty close to a kind of industrial-rave music. But Xotox also explored more minimal and refined fields. It’s not the most renowned side of Andreas Davids and that’s maybe why we discover it throughout a few ‘unreleased demo’-cuts from the early millennium years. The album also features demo versions from familiar tracks.

The album comes to an end with three technoid-minded remixes featuring the noticeable Denny Engler remix.

+ + + : A nice selection of Xotox’ essential pieces giving an interesting evolution of this electro-industrial project. The album also features multiple unreleased cuts, which is a nice surprise, even for the biggest fans. Speaking for myself I always have been more into the industrial cuts mixed with some electronic sequences.

– – – : It will be always the same thing with compilations and other ‘best of’ concepts; you’ll always wonder why some songs have not been featured on it!