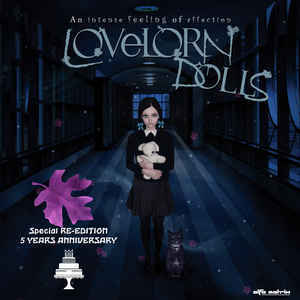 Background/Info: A few months ago we discovered the new side-project of Lovelorn Dolls singer Ladyhell called Sin Sin. And there’s more surprising news from the Lovelorn Dolls camp. This EP is a look back to the early years where the band was simply called Lovelorn. They self-released an EP of 5 songs entitled “An Intense Feeling Of Affection” so this is an opportunity for their growing fanbase to discover their early work.

Content: I was wondering about the content and style of the EP, but you immediately will recognize the typical goth-metal & pop influences the band from Brussels is dealing with. The original songs got reworked and finally found a place on the debut album “The House Of Wonders” (2013). This EP brings you the ‘rough’, ‘unpolished’ and ‘original’ versions.

You can consider this EP a demo, which the band probably sent to Alfa Matrix. We know what happened afterwards. The songs already reveal the fragile, but charismatic vocals of Ladyhell, the goth-rock guitar playing of Corpus Christi and the more pop-minded choruses. The song “Inside My Head” already reminded me of The Birthday Massacre. There also is this melancholic and depressed mood hanging over the work, which later on became a familiar trademark of their sound.

The little bonus of this EP is an extra bonus song, which unfortunately is not the most successful song Lovelorn Dolls have ever written, but it’s a nice extra for the fans.

+ + + : This is first of all a cool gift for the fans of Lovelorn Dolls. The band already showed certain potential and songs like “Save Me From Myself” and “Inside My Head” both are absolutely well-crafted.

– – – : The album versions of those songs are definitely better so where’s the real extra of this EP?

Conclusion: This EP is a typical production for the die-hard fans of Lovelorn Dolls although I can imagine some of them will for sure already have the ‘real’ original EP.

Best songs: “Save Me From Myself”, “Inside My Head”.