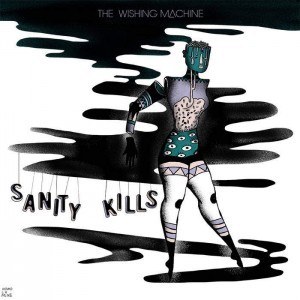 Background/Info: The Wishing Machine is a duo joined by a third member on the graphic part. Sophie Boss is a name who doesn’t maybe says that much, but she was the singer of Dark Sanctuary, which remains to me one of the most understated dark ethereal bands in history. The K is a multi-instrumentalist who also can look back on different involvements and experiences.

The band has already released several songs on their Bandcamp page.

Content: “Sanity Kills” is hard to grasp although inspired by elements of pop music and d’n’b elements. The most intriguing aspect is that their pop approach does not exactly featuring melodies. The pop format is accomplished by deep-resonating sound blasts mixed with some fine bleeps.

Sophie’s vocals are different from her work in Dark Sanctuary. She sings in a sensual, but intriguing way. It’s the kind of voice appealing for a dreamy trip throughout an imaginary, prosper space.

+ + + : The Wishing Machine clearly avoids jumping on fashion trends and danceable standards. This EP sounds like a will to create an own musical horizon, which is their main strength.

– – – : The 3rd and final song is more into the ‘reverie-style’, but it sounds too flat and without passion.

Conclusion: “Sanity Kills” features interesting elements, but I got the impression the band is still in search of their sound.