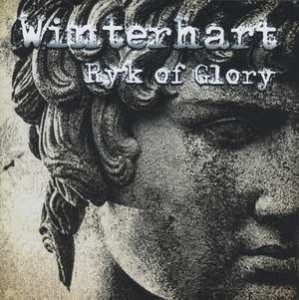 Background/Info: Behind Winterhart is hiding a rather famous electro duo. Falgalas and Wagner both got some fame for their involvement in the EBM-minded band Dance Or Die. They last year took the world by surprise unleashing a first album of Winterhart. “Time Doesn’t Wait” deals with neo-folk and related genres. Wagner already surprised his fans the year before releasing a digital album of Ruhestätte Schwarz, which was more into industrial and metal music.

Content: “Ryk Of Glory” is an extremely bombastic and epic minded work. The songs reveal heavy orchestral arrangements, but with more relaxing neo-folk passages featuring Wagner on acoustic guitar. There’s a strong visual appeal emerging from the songs while extra elements like mystic-like chants and other ethereal elements can be heard from time to time. The beautiful “Song Of Zeraphine” even sounds like a little wink to Dead Can Dance for its poignant ethereal content.

The production moves from beautiful ballads filled with some bombast towards more explicit electronic arrangements. One of the most surprising cut is “King For The Sun” mixing acoustic guitar and a rhythm reminding me of Kraftwerk.

But the best is yet to come with cover versions of Manowar and Joy Division, both totally transposed in heavy, epic cuts.

Last, but not least and absolutely essential, is the kind of conceptual approach of this album dealing with war themes and the rise and fall of great civilizations.

+ + + : “Ryk Of Glory” reveals a pretty accessible epic format mixing bombast and enjoyable guitar passages plus carrying melody lines. I also like Wagner’s deep timbre of voice, which totally fits with the music. Both cover versions –and especially the one of Manowar, are really well-crafted and purely epic. The concept is also a really great idea.

– – – : The main point that could hurt is the sound direction of Winterhart, which might be shocking for Dance Or Die fans.

Conclusion: Winterhart took me by surprise and especially because of the background of both members known and praised for their work under the Dance Or Die moniker. Falgalas and Wagner transformed themselves into sonic chameleons revealing an unexpected, but efficient epic sound.