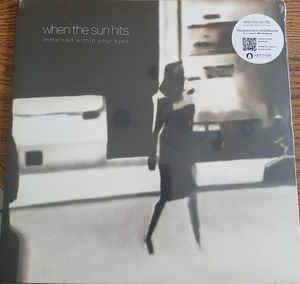 Background/Info: When The Sun Hits is a new formation consisting out of experienced musicians from Nottingham (UK) and named after a Slowdive song . This 5 member formation has now unleashed their debut work, which features 6 songs and might be considered as a mini-album as well.

Content: We in fact get 4 songs plus 2 instrumental intermezzos. When The Sun Hits takes us away into a foggy dream-pop universe, which is progressively moving into shoegaze music. The vocals are somewhat complaining.

+ + + : The EP opens with the beautiful “The Last Light”, which sounds as the perfect offspring between shoegaze and dream-pop. I especially like the progression of this song, which moves into an elevating sensation. Another noticeable cut is the hardest one –and most typical shoegaze-like “Lovedead Town”. This production reveals an efficient harmony between two different, but complementary influences.

– – – : Both instrumental breaks don’t exactly add any bonus and even if I’m not a huge fan of remixes, I would have prefer to hear a cool remix instead of poorly inspired breaks. I also regret some songs remain pretty short, which at the other side often was a characteristic of shoegaze music.

Conclusion: “Immersed Within Your Eyes” is a cool appetizer, which tastes for more.