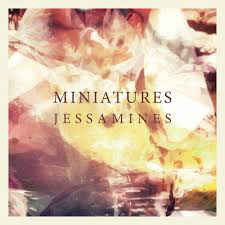 Background/Info: Operating from Melbourne (Australia) Miniatures was set up by New Zealand expatriates Ché Walden and Annemarie Duff. The band was completed with bass player Chris MacLean. After a few self-released EP’s Miniatures has now achieved its debut full length.

Content: Annemarie Duff’s timbre of voice directly reveals one of the main sources of inspiration, which clearly appears to be Cocteau Twins. There’s a similar dark wave-pop style characterized by melancholia. The guitar play is an important aspect of this band. And when the songs  become more shoegaze like you for sure can imagine the importance of the guitar.

+ + + : “Jessamines” is an album with a nice and exciting twist between dark-pop and shoegaze influences. Both genres have been perfectly executed and I was impressed by the great guitar playing, which now reminds me of Cocteau Twins and next becomes somewhat fuzzy and naughty shoegaze like. Annemarie Duff also is a talented vocalist and I especially like the kind of shimmering expression running through “What You Want”. But she also can sing   a more fragile expression.

– – – : Some of the tracks are maybe a little bit too similar while missing originality when the Cocteau Twins inspiration is sometimes too present.