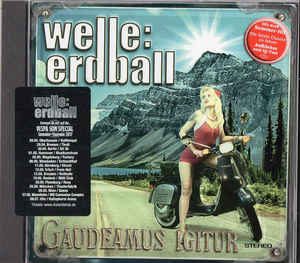 Background/Info: One of the most unique electro-pop formations from the scene strikes back with a new (mini)-album. The Welle: Erdball crew consists of ‘captain’ Honey on vocals accompanied by ALF behind the machines and programming plus backing vocalists Fräulein Venus and Lady Lila.

Content: Welle: Erdball remains unique because of their typical electro-sound. The vintage approach resulting in easy recognizable ‘Amiga’-like bleeps remains the essence of this band. Honey’s vocals sung in German and sometimes joined and/or alternated by female vocals is another typical trademark of the band.

I discovered that ”Gaudeamus Igitur” was a Latin song sung by students and now reworked and transformed by Welle: Erdball. It totally fits to the global approach of Welle: Erdball. It all sounds fun- and party like. The album is one more electro-pop exploration sometimes alternated by retro-like and totally funny psychedelic-pop passages (cf. “Die Letzte Chance Zu Leben”). But this German formation also knows the secret to compose more danceable club-tracks.

+ + + : The main strength of Welle: Erdball is the quite recognizable song. Once you’ve heard this formation you simply will never forget it and always recognize it. All kind of comparisons with Kraftwerk and co are easy to make, but in the end there’s only one Welle: Erdball. This new opus –or should I say ‘cantus’, is diversified. You’re now going to dance and next you gone laugh and have fun. I still like the female vocals and especially the delicious and sexy-like “L’Inconnue De La Seine” partially sung in French language.

– – – : The main strength of Welle: Erdball also is the main weakness. Once you’ve heard one of their songs, you can get the impression it all sounds the same like a copy from a copy.

Conclusion: Welle: Erdball no longer innovates, but simply composes the music they’re familiar with and which the fans are asking for.