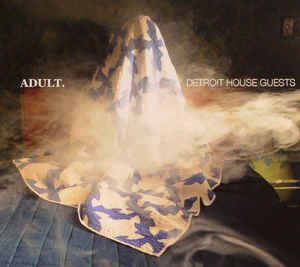 Content: The sound of Adult. always has been something apart. I remember to have heard songs from their early work played in electroclash clubs, which back in time symbolized a revival of electro-underground music. This work has a strong retro-inspiration as well. The sound treatments remain vintage-like and sometimes accentuated by the contribution of the guest artists. That’s probably the reason why some of the tracks evoke good-old souvenirs bringing me back to Psychic TV and Chris & Cosey.

Next to the experimental exposure “Detroit House Guests” also features more EBM-driven cuts. The songs are pretty minimal, but more danceable and heavy-like. Douglas McCarthy and Shannon Funchess both will bring you harder parts to dance to.

+ + + : Adult. brings you a creative exposure of modern electronics inspired and made with ‘old’ recipes and sound formulas. It creates a refreshing and diversified work, which is only accentuated by the input of all guests. There are several attention grabbers featured, but my preference clearly goes to the minimal-EBM driven “We Chase The Sound” featuring Shannon Funchess and “They’re Just Words” featuring the Nitzer Ebb front man. The other song featuring Douglas McCarthy is a funny cut for the lyrical content clearly evoking songs of Nitzer Ebb.

– – – : Some of the most experimental cuts aren’t the most convincing ones and clearly totally different from the ‘harder’ passages.

Conclusion: “Detroit House Guests” is a non-conventional electronic production, which sounds a bit like a modern version of Psychic TV, Chris & Cosey, Crash Course In Science and related names.