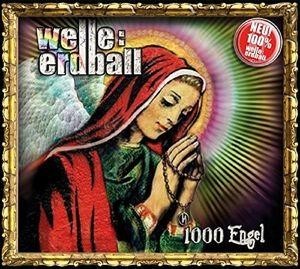 Content: If there’s an active electro-pop band we’ve decrypted all of their secrets, it for sure must be Welle: Erdball. Their unique electronic approach remains characterized by their very personal bleeping sequences, retro-electro style and German vocals. Once you’ve heard a song of this band you never will forget their sound formula.

“1000 Engel” is a classical Welle: Erdball release on, which I prefer the both remixes of the title song instead of the original mix. I personally prefer harder and more passionate cuts revealing a kind of ‘naughty’ production. They here don’t reinvent their sound, but seem to inject an extra boost upon the electro-pop basis. The mix of (mainly) male- and female vocals remains another familiar aspect, which is once again well-produced and efficient.

+ + + : This is not the ‘classical’-EP featuring a title song and multiple remixes. It looks a bit like an album as “1000 Engel” features several new songs and only a few remixes. Especially the remixes of “1000 Engel” by Massiv In Mensch and Rötkappchen are adding a real bonus to the EP. The work of Welle: Erdball remains well-crafted and masterly produced.

– – – : Despite of the great sound treatments, carrying tunes and exciting bleeps, this EP doesn’t innovate and sounds pretty predictable. A few songs are driven by some childish and cheep commercial tunes.

Conclusion: Welle: Erdball sounds like an experienced driver; you know that nothing can happen and that you’ll safely arrive after a cool trip. I have some doubts this band will ever experience new sound formula, but it remains a fully enjoyable experience.