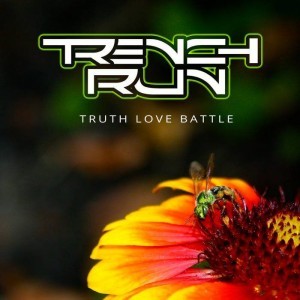 Background/Info: Andrew Hunter is hailing from Toronto (Canada) and is already involved in music for several years now. He released several productions under the Trench Run moniker, but his move to AnalogueTrash will maybe give him a wider and European exposure. Notice by the way that he in 2015 also became the new singer and co-writer of Atomzero.

Trench Run has been described as ‘inspired by 70s disco, 80s new wave and 90s industrial rock.’ This album is released as a limited cassette format.

Content: “Truth Love Battle” features 10 songs, which I can only, but define as the perfect synthesis between pop and rock music. Trench Run has built a sonic bridge between electronic music and guitar and rock music. The vocals reflect a passionate artist injecting a soul to his music.

The songs are pretty diverse moving in between harder cuts and evasive passages. Some of the arrangements reveal a refined taste.

Globally speaking the songs are well-crafted and there’s a noticeable progression emerging from a few cuts. “Where Dreams Never Go” is a great illustration in the genre, this song even reminds me of Mesh with some extra guitar power on top.

+ + + : I like an explicit title like “God On Cocaine” or the transcendental electro structures running through “Skill Kill”. There also is a perfect electro-rock balance on “Sometimes” and the already evoked power format of “Where Dreams Never Go” reminding me of Mesh.

– – – : I’m missing some coherence between the songs, which move on different paths and influences.

Conclusion: Trench Run is definitely a band striving for a unique sound however the multiple influences make it not that easy, although there are captivating songs featured at this work.