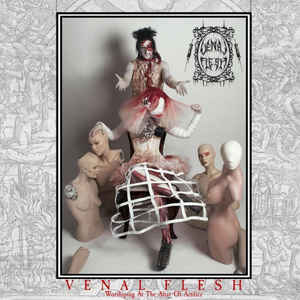 Background/Info: Hailing from Washington DC (USA) Venal Flesh got signed to Alfa Matrix and last year released the digital EP “Sacrament To The Scalpel”. The band previously released another digital EP at the now gone Juggernaut Music Group. Driven by the creative spirit of Dan Barrett (Worms Of The Earth) and DJ/model VanityKills the duo has now accomplished their official debut album.

Content: Venal Flesh clearly deals with pure dark-electronics and has been inspired by a concept ‘exploring the juxtaposition of desire for physical beauty with fanatical religious devotion’. They ‘explore here the abyssal torments of imperfection and the struggle to attain transcendence and perfection via self-mutilation, plastic surgery, advanced medicine and more’.

It all sounds like a rather tormenting theme, which has been perfectly transposed into pure (h)el(l)ectro music. Venal Flesh is the kind of formation that reminds me to Suicide Commando for the icy, tormenting leads and sequences and the dark, doom-like atmospheres of Yelworc. They clearly don’t innovate, but are real masters in the writing of efficient dark-electro music.

The songs have been remarkably composed and achieved by cool sound treatments, harsh vocals and carrying, cold tunes. The vocals are pretty harsh and demonic, which is the only and appropriated vocals format for this kind of music.

The extra CD of the limited version features 5 exclusive songs and 5 remixes. The tracks are not exactly the best ones so I think it was the right choice to place them on this extra disc although they’re not just album fillers. Among the remixes you’ll find the mark of Mnemonic, Adeonesis, A7ie and Dunkelwerk.

+ + + : This is a rather interesting and successful debut album featuring real cool songs. The tracks reflect maturity and an efficient formula made of stumping rhythms, elaborated passages and icy, carrying choruses lead by a possessed, but great vocalist. I especially like the somewhat mystic sounding “Emulgent Disfigurement”, which was originally released at the Juggernaut Music EP.

– – – : No doubt about it, this is a well-crafted album, but I’m missing some diversity in the tracklist. The songs are quite similar to each other so after a few cuts it all starts a bit to become predictable and without surprises. The extra disc of the limited edition is a bit disappointing and doesn’t deliver any real bonus. There’re less essential new songs and poorly inspired remixes on it.

Conclusion: Speaking for myself I expected a bit more out of this debut album, but a few great cuts make me think there’s more potential hiding inside this band than what they’ve shown so far.