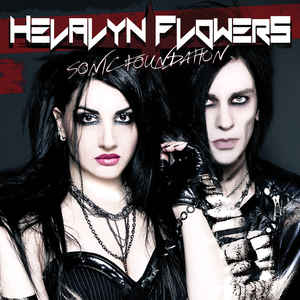 Background/Info: Helalyn Flowers are back on track unleashing their 4th full length album, which has been released 9 years after their successful debut “A Voluntary Coincidence”. The band became one of the most successful formations of the impressive Alfa Matrix roster and their last year released “Beware Of Light”-EP featuring Chris Pohl (Blutengel, Terminal Choice) has only increased their popularity.

Content: The new work moves on where they left off from the previous album “White Me In Black Me Out”. Three years have passed and the Italian duo clearly took their time to reconsider their global production. The influences mixing violent and somewhat metal-minded guitar passages and electronic sequences haven’t changed nor the charismatic vocals of N0emi Aurora. The main evolution is hiding behind a judicious harmony between guitar and electronics and the symbiosis MaXX has realized bringing metal, gothic and electronics together like they have been always related to each other. The songs are filled with adrenaline and the arrangements accomplished with bombast and epic influences.

Over the years the guitar riffs became more violent while the electronics got injected with more power and more unique sound blasts. The songs are aggressive and the choruses are hard and punchy. Helalyn Flowers became more open-minded than before, yet more aggressive. It all feels like a super-sonic speed train annihilating everything in its path.

The regular album features Chris Pohl singing on “Beware Of Light – Version 2”, and there is also a song with Angelspit.

The “Bonus Tracks Version” features multiple remixes, which have been mainly accomplished by label mates. I especially recommend the great contribution of Schwarzblut and The Psychic Force plus a terrific and somewhat FLA-remix by Helalyn Flowers themselves.

+ + + : Helalyn Flowers is one of these unique bands, which never stops to increase their writing skills while the global production and mixing is ultra professional. This band is driven by the creative spirit of a genius producer (MaXX) and the sensual charisma of a talented vocalist (N0emi). The duo together with Chris Pohl is a pure sonic orgasm!

– – – : I’m not as convinced with a few softer and somewhat naughty-pop like songs while globally speaking I expected a bit more out of some remixes.

Conclusion: The “Sonic Foundation” accomplished by Helalyn Flowers sounds like a fist of steel that hits you right in the face. It’s a violent and furious production revealing many powerful songs.