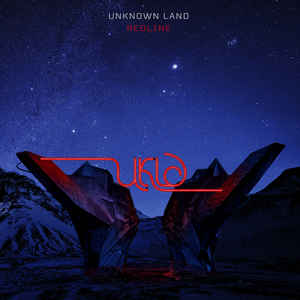 Background/Info: Unknown Land is the meeting between a Chileen singer/producer (Lucia Ponticas) and an Australian producer (Rob Bryant). They last year released the album “33°” which sound as a delicate and artistic music caress and which has been added as extra disc on “Redline”

Content: “Redline” features 5 new songs, which are characterized by sensual female vocals. The slow rhythm patterns create a perfect twist with the singer. The music has been accomplished by delicate treatments and beautiful sequences. You rapidly get the impression joining an ethereal dimension accomplished with electronic space treatments.

+ + + : Unknown Land is a band you really have to discover. I’m deeply impressed by the very personal approach of the band, which is an original mixture between sensual and somewhat ethereal vocals at one side and refined electronics at the other side. The three first tracks are worthy of examination. “Qualia” reminds me a bit of Elenna Fossi (Kirlian Camera, Spectra Paris) for the sensual and mysterious sound. I also noticed a great evolution in the global production process from the debut album towards this EP.

– – – : Both last cuts could have been a bit more elaborated. There clearly is a noticeable difference with the opening cuts, which are more accomplished.

Conclusion: Unknown Land is a real interesting discovery for its original sound and sexy vocals.

Since you’re here … … we have a small favour to ask. More people are reading Side-Line Magazine than ever but advertising revenues across the media are falling fast. And unlike many news organisations, we haven’t put up a paywall – we want to keep our journalism as open as we can. So you can see why we need to ask for your help. Side-Line’s independent journalism takes a lot of time, money and hard work to produce. But we do it because we want to push the artists we like and who are equally fighting to survive. If everyone who reads our reporting, who likes it, helps fund it, our future would be much more secure. For as little as 5 US$, you can support Side-Line Magazine – and it only takes a minute. Thank you. The donations are safely powered by Paypal.
Tags: RedLine, Unknown Land