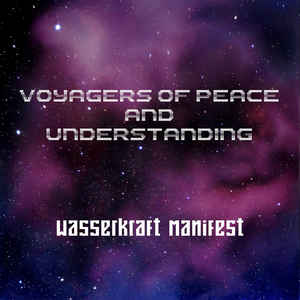 Background/Info: “Voyagers Of Peace And Understanding” is the debut album of the Swedish electro-pop band Wasserkraft Manifest. The band is a trio featuring 2 female members and one single male member.

Content: Wasserkraft Manifest sounds in the Swedish electro-pop tradition, which is based upon 80s electro-pop and new-elements mixed with an own and more contemporary touch. It’s a melodic composition, which will definitely appeal for all vintage electro-pop lovers.

All members seem to have contributed to the vocals, which sometimes have been produced with robotic vocals. Most of the songs have been sung in English, but you also will notice lyrics in French and German.

+ + + : I like the ‘vintage’ approach of the composition. It sounds in the purest tradition of synth-pop music and might evoke legendary formations such as A-Ha, but even Sandra. The least I can say is that Wasserkraft Manifest are truly melody-makers. Most of the choruses are catchy and melodic. I also enjoyed numerous sweeps running through this work. Last, but not least there’re some great vocal parts on this album revealing grave male vocals at one side and angelic female vocals at the other side.

– – – : A few cuts are maybe a little less too ‘happy’ sounding making me think to synth-pop music for teenagers. The song “Lightyears” is one of these cuts, which speaking for myself couldn’t convince me for any moment for sounding a bit cheap and uninspired-like.

Conclusion: This album stands for happy electro-pop music. It’s a pleasant and easy listening production, which will make you feel happy.

Since you’re here … … we have a small favour to ask. More people are reading Side-Line Magazine than ever but advertising revenues across the media are falling fast. And unlike many news organisations, we haven’t put up a paywall – we want to keep our journalism as open as we can. So you can see why we need to ask for your help. Side-Line’s independent journalism takes a lot of time, money and hard work to produce. But we do it because we want to push the artists we like and who are equally fighting to survive. If everyone who reads our reporting, who likes it, helps fund it, our future would be much more secure. For as little as 5 US$, you can support Side-Line Magazine – and it only takes a minute. Thank you. The donations are safely powered by Paypal.
Tags: a-ha, synth-pop, Wasserkraft Manifest