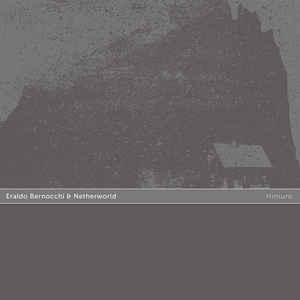 Background/Info: “Himuro” is the meeting between two great Italian artists. Eraldo Bernocchi (known from his involvement in Sigillum S, Simm and several other projects) and Alessandro Tedeschi (aka Netherworld and Glacial Movements label owner) joined hands for this conceptual album around the theme of icebergs. ‘The goal of this new Iceberg series of releases on Glacial Movements is to describe through techno / dub music this huge mass of ice’.

Content: You don’t exactly expect both protagonists going ‘techno’! “Himuro” is not exactly what I would call a typical techno release, but a mix of multiple influences, which are often driven by a slow tempo and space-like sound treatments. It sounds pretty ambient-like and even somewhat cinematographic like. Some passages are more into complexity and IDM approach. It remains first of all an interesting experiment and a fusion between opposite styles.

+ + + : This sonic journey sounds a bit like a challenge. It’s not that easy to mix elements of techno and even deep-house together with ambient passages and experimental parts featuring field recordings and manipulated guitar effects. It all together creates an evasive sensation and resulting in a few complex and well-crafted pieces for IDM lovers. “Hyosetsu” is a magic piece, but globally speaking all tracks have something fascinating such as crisping noises, dark lounge grooves, slow and deep bouncing heartbeat-like kicks and pure soundtrack parts.

– – – : It’s not an easy thing to define the sound of this work, but it more resulted from the fusion between multiple influences. And that’s just fine although I’m not a huge fan of the more ambient/cinematographic passages.

Conclusion: Eraldo Bernocchi & Netherworld clearly don’t care about established styles and Other fashion trends. This album is a kind of ‘free artistic’ expression featuring an impressive sonic canvas accomplished around a conceptual theme.