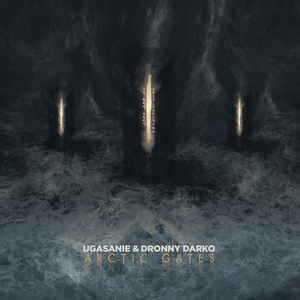 Background/Info: “Arctic Gates” resulted from the common efforts between two familiar artists from the Cryo Chamber label. Ugasanie (Belarus) and Dronny Darko (Ukraine) joined hands to compose an album based upon the sensation of being lost or imprisoned at the Arctic continent.

Content: The concept is a great source of inspiration for this kind of music. “Arctic Gates” perfectly recreates feelings of loneliness and abandon. Numerous field recordings and little, crispy noises are merging together creating a feeling of paranoia.

+ + + : “Arctic Gates” is clearly driven by multiple aquatic field recordings. It’s a dark abyssal feeling, which is joined by some lost electronic signals. You sometimes get the feeling hearing Morse codes coming from a desperate soul in search of deliverance. The progression of the tracks is pretty slow and you get this permanent feeling of danger getting you paranoid.

– – – : I personally prefer to hear both artists separately. This album is not that bad, but a bit stereotypical. It doesn’t bring new elements to a style, which is a bit saturated by similar experiments and similar themes.

Conclusion: This album is for the Cryo Chamber die-hard fans and/or the fans of both artists. “Arctic Gates” makes sense, but is not exactly a must have album!