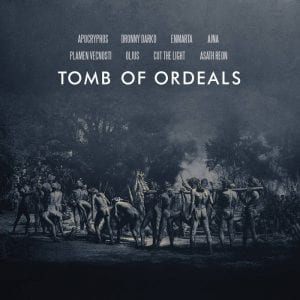 Background/Info: We welcome the fourth volume of the “Tomb”-series created by Cryo Chamber this time dealing about ordeals. Eight bands contributed each with a track to “Tomb Of Ordeals”, which can’t be seen as an ‘ordinary’ compilation, but rather a conceptual release featuring eight projects focused on one central theme. “Tomb Of Empires”, “Tomb Of Seers”, “Tomb Of Druids” and the new one “Tomb Of Ordeals” are now also available as CD-box.

Content: The common element between all the projects remains the fascination for dark-ambient and dark-cinematographic music. I also noticed a few ritual passages. There’s an interesting diversity between the artists, revealing some early-like industrial/ambient elements (like the track by Dronny Darko) and more contemporary passages.

+ + + : This fourth volume of the “Tomb”-series also is my favorite.. Some artists such as Dronny Darko, Apocryphos and Cut The Light have composed impressive work. Dronny Darko’s “Geist” reminds me of the early 80s dark-ambient work of Lustmord. From the very first monstrous sound of the track you feel like a paranoid sensation. This track has such a strong visual appeal it simply sounds like an ode to some pioneers in the genre. The progression of the track composed by Apochryphos is another moment of magic while Cut The Light deals with overwhelming sound treatments. I also have to mention noticeable contributions from Oljus and Ajna.

Conclusion: “Tomb Of Ordeals” is a frightening title for a great work. Cryo Chamber likes this kind of conceptual- and collaboration releases, but this one is according to me the most accomplished one from the list.

Since you’re here … … we have a small favour to ask. More people are reading Side-Line Magazine than ever but advertising revenues across the media are falling fast. And unlike many news organisations, we haven’t put up a paywall – we want to keep our journalism as open as we can. So you can see why we need to ask for your help. Side-Line’s independent journalism takes a lot of time, money and hard work to produce. But we do it because we want to push the artists we like and who are equally fighting to survive. If everyone who reads our reporting, who likes it, helps fund it, our future would be much more secure. For as little as 5 US$, you can support Side-Line Magazine – and it only takes a minute. Thank you. The donations are safely powered by Paypal.
Tags: Ajna, Lustmord, Paranoid, ritual, Tomb Of Ordeals