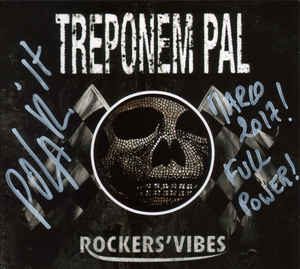 Background/Info: Treponem Pal is one of those ‘dinos’ who are invincible. “Rockers’Vibes” is an album celebrating the French band’s 30th anniversary.

Content: I think there’s no better way celebrating an anniversary than having fun and simply doing what you like. Treponem Pal released album with cover versions of famous artists: B-52’s, Thin Lizzy, Lee Hazlewood, John D. Loudermilk, Tom Waits, Ten Years After and Dead Boys. They also released 5 new songs. The sound of the band remains for sure driven by industrial-metal music, but they assimilated their own sound with the original versions of the songs they covered as if they were written by Treponem Pal.

The new songs are also very efficient, somewhat harder and reminding me of a fusion between Metallica and The Young Gods.

+ + + : An album with cover versions always is something special, but the way Treponem Pal covered legendary cuts such as “Planet Claire” from B-52’ and “Some Velvet Morning” from Lee Hazlewood is absolutely great. You immediately recognize the original songs, but they have been reworked with power and ‘metal’ getting transposed into the tough universe of Treponem Pal. That’s exactly the same for the vocals. I remain an addict of the heavy guitar riffs this band is playing. Among the new songs I especially want to mention “Freedom Or Suicide” and “Sounds On Fire”. Treponem Pal hasn’t lost their power and the magic of the early years!

– – – : You can always discuss cover versions, and not many bands can do better than the original songs (especially when it features legendary hits). I’m not into this kind of release, but there are always exceptions to the rule…

Conclusion: This album is a great birthday present for a band, which clearly hasn’t lost its passion to compose powerful music.