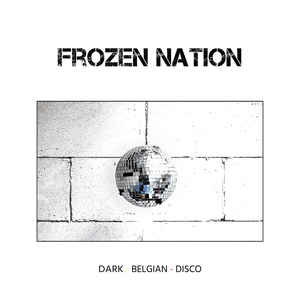 Background/Info: Frozen Nation is a Belgian-French trio which is now active for a few years. Their debut work “Dark Belgian Disco” reveals 10 songs.

Content: I didn’t know want to expect from this band releasing an album with a crazy title. The sound seems inspired by 80s electronics and the Italodisco movement. It sometimes comes close to electro-clash as well. It first of all seems to be a danceable bridge between the evoked genres from the past and a more refreshing and contemporary input. It’s the kind of album that might appeal for fans of Trance-X.

+ + + : I have a crush on this album, which is mixing different elements of electro/robotic-pop music. It’s danceable, definitely fun-like and simply the kind of music to get people happy.  But the songs are also written with intelligence and a real care of sound treatments and effects reminding me of the great disco decade. I noticed great bass lines and carrying choruses. “The Last Fight Of Hector” is a potential dancefloor killer, but I also can mention “I Failed For You” and “The Cry”. Frozen Nation has a real sexy sound.

– – – : I can imagine it also is the kind of electro-pop music some people will experience as too kitsch or simply irrelevant. In the end it always remains subjective and that’s why everyone has to make up their own mind.

Conclusion: Frozen Nation is a somewhat of a cold band name for the hot and sexy music they’re composing. I like this kind of ‘glitter’-pop, which I totally support and fully recommend. This is one of the best discoveries from 2017!

Since you’re here … … we have a small favour to ask. More people are reading Side-Line Magazine than ever but advertising revenues across the media are falling fast. And unlike many news organisations, we haven’t put up a paywall – we want to keep our journalism as open as we can. So you can see why we need to ask for your help. Side-Line’s independent journalism takes a lot of time, money and hard work to produce. But we do it because we want to push the artists we like and who are equally fighting to survive. If everyone who reads our reporting, who likes it, helps fund it, our future would be much more secure. For as little as 5 US$, you can support Side-Line Magazine – and it only takes a minute. Thank you. The donations are safely powered by Paypal.
Tags: Frozen Nation