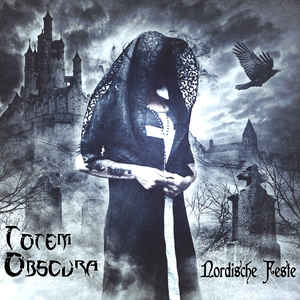 Background/Info: Behind Totem Obscura is hiding Pedro ‘Acylum’ Engel and his wife Nadine ‘Croona’ Engel. They’re both known for their work under the Acylum moniker, but Nadine recently also released a harsh and industrial new album as Aengeldust. “Nordische Fest” is the second opus of Totem Obscura.

Content: Totem Obscura is a bit to Heimataerde, like Acylum is to Wumpscut! “Nordische Feste” mixes dark-electronic elements together with medieval atmospheres. The German lyrics bring a gothic touch to the work. But the album is not excelling in power and sonic violence, but reveals overwhelming atmospheres and even melancholia. I sometimes get the impression Totem Obscura got inspired by the imaginary world of “Game Of Thrones” and I think to have recognized samplings from this famous series running through the album.

The album also features a song featuring Cosmic Armchair, which logically resulted in a more danceable approach. Another noticeable cut is “Helden” for featuring Hubert Kah (who did some backing vocals in the 80s for Sandra). Last, but not least you’ll discover remixes by Ruined Conflict, Hell:Sector and Crytek.

+ + + : I really admire the work and genius of Pedro Engel who according to me is one of the most talented musicians of his era dealing with dark-electronics. But he also is a man of many talents, which can accomplish much more than only Acylum tracks. I have to admit I expected this album to be a bit harder, but globally speaking I like the medieval atmospheres this album has been made of. I like the bleak mood recovering the songs, which feel like announcing a nearby disaster. It all sounds raw and tormented. The famous EP-song “Eisenmann” remains one of the major cuts of this album, but I also have to mention “Blut Marschiert” for its coldness. The medieval chants running through a few cuts inject an extra touch of mystery and visual appeal. Among the remixes I want to mention a great contribution by Ruined Conflict.

– – – : I expected a harder and powerful album, but that says more about me instead of the band. “Nordische Feste” is not the kind of work that will put dancefloors on fire (like early Heimataerde) although it’s a fascinating experience.

Conclusion: Totem Obscura transforms dark-electronic music into a medieval voyage and other fantasy universes. This is the perfect alternative soundtrack for “Game Of Thrones” or “The Lord Of The Rings”.