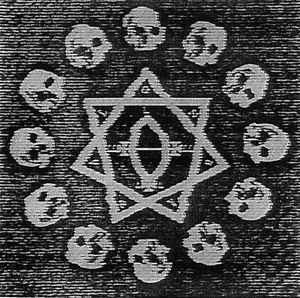 Background/Info: Behind this obscure Swedish project is hiding Thomas Martin Ekelund (aka Th. Tot). Trepaneringsritualen became a renowned formation in the darkest corners of ritual- and death-industrial music. “Deathward To The Womb” was originally released in 2012; Release The Bats Records released the album as a 12” vinyl while Black Horizons and Merzbild released it as a cassette. Cold Spring now released the opus on CD format with an extra bonus cut. It is also available as a limited vinyl edition.

Content: If you don’t already know this masterpiece of Trepaneringsritualen you’ll discover these ghost-like voices lost in haunted, obscure atmospheres, accomplished with numerous noises and ritual passages. The concept is mystic and ritual-like, which has been perfectly adapted into sound. The heavy sonic sweeps are like the sound of an imaginary, monstrous whip opening the gate to an unknown world.

Dark electronic loops are often moving into pure ritual passages, sometimes joined by shouting vocals. Next to the 6 original tracks of the album we now get an extra track, which is an endless and varied piece featuring the unavoidable ritual parts next to vibrating throat chants and industrial drones.

+ + + : “Deathward To The Womb” remains one of the absolute masterpieces in the history of this band. It’s the perfect offspring between dark-ambient, ritual and death-industrial music. There’s a poignant progression in the songwriting, which reaches several climaxes like on the title-track and “She Is Flame Of Life”. The bonus cut “I Remember When I Was God” is also worthy of examination. This is one more deeply ritual cut that will hold you in its grip for more than 10 minutes.

– – – : Trepaneringsritualen is a band you’d better avoid if you’re not familiar with extreme sonic creation. You either going to like it or not, there’s no in between!

Conclusion: Trepaneringsritualen is a band that gained a serious recognition in a rather short lapse of time. No doubt about it, the very own sound approach and explicit ritual character of the work both remain the main characteristics of this enigmatic artist.

Best songs: “Deathward To The Womb”, “I Remember When I Was God”, “She Is Flame Of Life”.