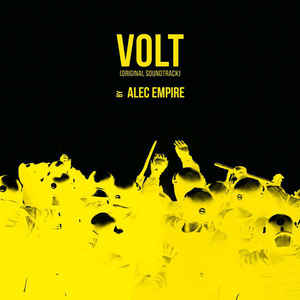 Background/Info: Alec Empire will be always linked to Atari Teenage Riot, but this German artist has been involved in many other projects, labels ao. “Volt” is for sure a particular composition as it’s a soundtrack the artist composed for the same-titled sci-fi thriller movie (2016). It also is a premiere for Dependent to release a soundtrack album. Notice by the way the album is also available in a limited (double) vinyl format.

Content: Alec Empire revealed to have been inspired by the work of John Carpenter. “Volt” clearly sounds like a cinematographic experience, filled with bombastic arrangements, piano-like passages, but also music with a strong visual strength. It’s very experimental-like, but composed with industrial sound treatments and electronic passages reminding me of the real style of Alec Empire. I also noticed a passage with a saxophone sound.

+ + + : First of all you have to figure “Volt” is a soundtrack composition, which has less in common with the familiar work of this artist. But it’s an interesting listening as next to a pure and classical soundtrack approach he now and then gets back to his real sound resulting in technoid and acid-like passages. The work is also characterized by overwhelming ‘ambient’ passages revealing a more tormented sound accentuated by industrial noises. The main strength of this soundtrack however is its diversity, which can be noticed in the influences and the arsenal of sounds.

– – – : I can imagine “Volt” really means a lot for Alec Empire and is an important work in the artist’s impressive discography, but it’s definitely not a classical work, which will seduce and convince his numerous fans. It’s less accessible because of the experimental approach.

Conclusion: “Volt” will certainly not enter into history as a famous soundtrack. It just reveals another side of this talented and renowned artist and music you have to discover together with the movie.