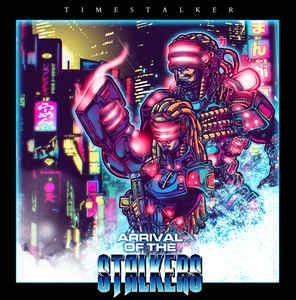 Background/Info: Timetalker is a Swiss solo-project, which previously released the digital single “Street Prowler”. “Arrival Of The Stalkers” is a sort of mini-album featuring 6 songs.

Content: Multiple retro-minded influences are running throughout the work. It takes off with a rather EBM-inspired cut and progressively moves on into atmospheric- and minimal-orientated pop songs. It’s pure synth-music reminding to the 80s and accentuated by some typical effects from that time.

The space-like touch supporting most of the songs is also pretty cinematographic. The songs are instrumentals, which reinforce the soundtrack feeling.

+ + + : Timestalker sounds a bit like a sonic alien dealing with retro-electronics. It’s much more than simply an influence, which is running through the work, but there are many little details and effects evoking the 80s. I like the EBM input running through the title song, but still this more evasive body feeling, which is noticeable on “Call For Vengeance”.

– – – : I can’t get away from the feeling that this is a kind of first demo. I got the impression that a few songs aren’t totally accomplished and that’s also because of their instrumental format. A few vocal lines would add a real bonus to the compositions.

Conclusion: Timestalker sounds like a ‘time traveler’, bringing us back to the magic of 80s electro-synth music. It still remains a popular place even for new and young musicians.

Best songs: “Arrival Of The Stalkers”, “Call For Vengeance”.

Since you’re here … … we have a small favour to ask. More people are reading Side-Line Magazine than ever but advertising revenues across the media are falling fast. And unlike many news organisations, we haven’t put up a paywall – we want to keep our journalism as open as we can. So you can see why we need to ask for your help. Side-Line’s independent journalism takes a lot of time, money and hard work to produce. But we do it because we want to push the artists we like and who are equally fighting to survive. If everyone who reads our reporting, who likes it, helps fund it, our future would be much more secure. For as little as 5 US$, you can support Side-Line Magazine – and it only takes a minute. Thank you. The donations are safely powered by Paypal.
Tags: EBM, Timestalker