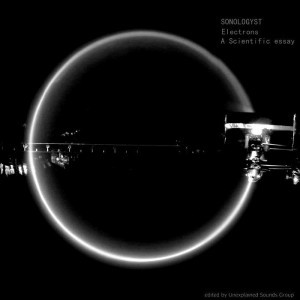 Background/Info: Raffaele Pezzella is an Italian artist and the owner of Unexplained Sound Group. He’s active as a musician under the Sonologyst moniker and has already released multiple productions during the past few years. This new work reveals a conceptual approach transposing theories about electrons into music.

Content: If science and research about electrons is a complex, but fascinating subject, it also reflects the sonic exploration of Sonologyst. The work is a constant exploration of experimental noise fields, which often sound like signals emerging from distant and unknown music planets. But is it really ‘music’ properly speaking?

“Electrons: A Scientific Essay” rapidly becomes a kind of abstract soundscape where the composer is manipulating the knobs of his machines to obtain a kind of hostile sound atmosphere. There’s an interesting progression running through the tracks and especially the final cuts are worthy of examination.

+ + + : Raffaele Pezzella is more a sound architect instead of a musician. You feel a fascination for sounds and noises, which have been transformed and adapted into a kind of sonic rarity with a dark and sometimes disturbing touch. This is the right production for lovers of experimental music.

– – – : Sonologyst clearly appeals for a much selected group of music freaks. This is not the most accessible production and clearly an antidote to music with the typical verse – chorus structure.

Conclusion: Sonologyst is a kind of sonic alien composing a paranormal sound, which is impossible to define and hard to catch.

Since you’re here … … we have a small favour to ask. More people are reading Side-Line Magazine than ever but advertising revenues across the media are falling fast. And unlike many news organisations, we haven’t put up a paywall – we want to keep our journalism as open as we can. So you can see why we need to ask for your help. Side-Line’s independent journalism takes a lot of time, money and hard work to produce. But we do it because we want to push the artists we like and who are equally fighting to survive. If everyone who reads our reporting, who likes it, helps fund it, our future would be much more secure. For as little as 5 US$, you can support Side-Line Magazine – and it only takes a minute. Thank you. The donations are safely powered by Paypal.
Tags: Sonologyst