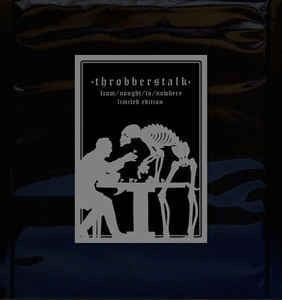 Background/Info: Throbberstalk is a German band that was mainly active in between 1995 and 1999. They were inspired by various music styles moving from Wumpscut to In The Nursery. Monopol Records decided to release their work and we discovered a few years ago the great “Lest We Forget”-album. This album features a new selection of tracks that were composed during their active years plus an extra album.

Content: I was already deeply impressed by the previous release and this work only confirms the great, creative spirit of Throbberstalk. It’s not that easy to define their work, but they clearly found their inspiration in haunted electro formats reminding me to the work of Yelworc with some extra bombast and ambient elements on top. There also is a kind of neo-classic approach, which comes especially through in the piano-like arrangements and a more bombast and somewhat industrial-like element.

I already mentioned Yelworc as a possible source of inspiration, but the coldness and originality of the work reminds me of Mortal Constraint as well. All these bands were active during the same period and clearly shared a same creative mind to compose a different kind of electronics. The cadence remains pretty slow and the vocals are rather harsh, but totally matching with this kind of music.

The bonus disc features 14 extra songs, which are more intimate-like. Throbberstalk here reveals a more soundtrack-inspired approach. The neo-classic touch is more explicit while I also noticed vague martial elements. The songs are filled with sadness and composed with great delicacy. Some fine bleeps can be heard as well. A few vocal lines can be heard and sound more like samplings.

+ + + : I like the sound of this band, which stands for an original electronic approach. This album clearly reveals another dark-electro format, which is more into ambient, industrial and even neo-classic influences. It could be the perfect soundtrack for a dark movie or horror-like documentary. The sound is accomplished with a constant melodic input.

– – – : Throbberstalk is the kind of band the current scene is missing. They didn’t become a famous band, but their music was original and miles away from stereotypical dark-electro releases.

Conclusion: Throbberstalk sounds like a sonic phantom from the past haunting the poorly, inspired contemporary dark-electronic scene. The message for artists could be to follow your instinct and exorcise hidden ideas.