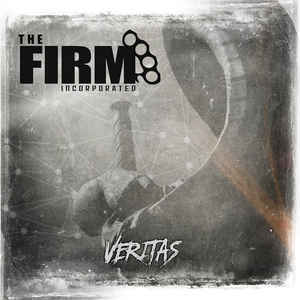 Content: The album totally fulfills the expectations after the terrific “Abgebrannt”-EP. The songs are non-stop driven by amazing electro blasts, aggressive sequences, heavy kicks, carrying choruses lead by the charismatic and harsh vocals of Jens Kästel (singing in German). “Veritas” is somewhere in between dark-electro and EBM and clearly reminds me of Funker Vogt.

This work reveals many potential hits, but “Abgebrannt” remains for sure one of the greatest songs. It’s a real good exposure of the band’s potential, which clearly reflects experienced musicians and a high-tech sound production.

+ + + : The sound formula is not new and rapidly evokes the successful Funker Vogt sound formula. Jens Kästel clearly has found a new challenge and talented musicians to move on with his career. The mixing and global production is absolutely amazing and I mainly refer to the numerous heavy sound blasts running through the songs. Next to the familiar “Abgebrannt” I also noticed other potential hits like “BUTF” and “Geschichten Ohne Wert”.

– – – : The only reproach I might think of is the certain comparison with Funker Vogt, which is quite logic because of Jens Kästel, but more surprising for the sound, which has been composed by E-Craft members. But on the other hand I would say ‘who cares’ because it’s already 3 years ago now since Funker Vogt released anything new.

Conclusion: “Veritas” confirmed the great writing skills of this new formation driven by old electro-heads. This is an astonishing debut album that will set dancefloors on fire.

Since you’re here … … we have a small favour to ask. More people are reading Side-Line Magazine than ever but advertising revenues across the media are falling fast. And unlike many news organisations, we haven’t put up a paywall – we want to keep our journalism as open as we can. So you can see why we need to ask for your help. Side-Line’s independent journalism takes a lot of time, money and hard work to produce. But we do it because we want to push the artists we like and who are equally fighting to survive. If everyone who reads our reporting, who likes it, helps fund it, our future would be much more secure. For as little as 5 US$, you can support Side-Line Magazine – and it only takes a minute. Thank you. The donations are safely powered by Paypal.
Tags: EBM, The Firm Incorporated