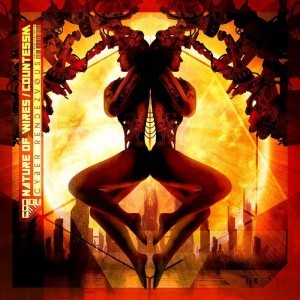 Background/Info: Formed in 1986 by Gary Watts and Andrew Stirling-Brown, Nature of Wires has been active since 1994. The band played a mix of cover songs and original pieces. A self-released album “Modus Operandi” saw the light of day in 1993. After a 20 year hibernation Gary Watts started composing music again at the end of 2014 and joined forces with Maren Northway aka CountessM who has been introduced as a respected singer based in California. “Cyber Rendezvous” is their debut album featuring 10 songs.

Content: I realized that Nature Of Wires was featured on the conceptual sampler “Beat:Cancer v3” released on AnalogueTrash earlier this year. I honestly didn’t keep their name in mind, but I can assure you “Cyber Rendezvous” is the kind of sonic appointment you don’t want to miss.

The sound is driven by power-pop vibes accentuated by some vague technoid elements on top. There’s a kind of constant duality between a bombastic-like rhythms plus heavy blasting sound treatments on one side and refined sequences plus evasive synth passages on the other. The bewitching vocals of CountessM are literally supporting the music with a warm and sensual breeze. The timbre of voice is somewhat androgenic creating a mysterious touch, but it also is a really magical voice. I also noticed a delicious poetry emerging from a few lyrical parts, which increases the fascination for this artist.

+ + + : AnalogueTrash Records has a nose for discovering fine and somewhat different-like electro-pop projects. Nature Of Wires & CountessM definitely belongs to this restricted list of visionary artists from the contemporary pop scene. There’s a sweet harmony between the music and the vocals. The aforementioned duality features elements that finally become complementary resulting in a solid and compact opus. The work also reveals an interesting diversity between a few harder cuts and more evasive passages.

– – – : I just noticed a few small passages where the harmony between music and vocals is lost, but globally speaking it definitely is not a point that will hurt you. The main difficulty of this band will be probably to catch the attention of the electro-pop community.

Conclusion: Like in any kind of music style you have bands that are simply jumping on the fashion train and others daring to bring something more personal and innovative. I’m not saying that Nature Of Wires & CountessM is a ground-breaking duo, but they definitely deal with a refreshing pop format.

Best songs: “The Feast On Famine”, “’Til Tomorrow”, “Dance With Your Own Skeletons”, “Cyber Rendezvous”.

Since you’re here … … we have a small favour to ask. More people are reading Side-Line Magazine than ever but advertising revenues across the media are falling fast. And unlike many news organisations, we haven’t put up a paywall – we want to keep our journalism as open as we can. So you can see why we need to ask for your help. Side-Line’s independent journalism takes a lot of time, money and hard work to produce. But we do it because we want to push the artists we like and who are equally fighting to survive. If everyone who reads our reporting, who likes it, helps fund it, our future would be much more secure. For as little as 5 US$, you can support Side-Line Magazine – and it only takes a minute. Thank you. The donations are safely powered by Paypal.
Tags: AnalogueTrash, Nature Of Wires & CountessM