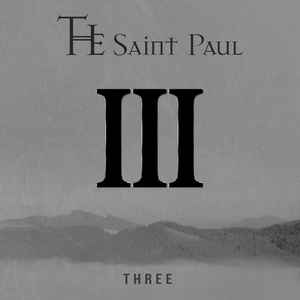 Background/Info: “Three” logically is the third album by the German The Saint Paul trio. It also is their second opus released on Infacted.

Content: The Saint Paul remains faithful to the influences and ingredients of both previous albums. The songs are moving from pure electro-pop sometimes accentuated by sweet, evasive passages towards harder and somewhat EBM driven cuts. The production is fully accomplished and revealing a great progression in songwriting.

+ + + : You can feel the growing maturity of this band. The sound formula remains the same when it comes to influences, mixing EBM and electro-pop, but the composition is more sophisticated. The global production process has been improved and that’s what makes the difference with their debut work (cf. “Consequence”) released in 2013 on Danse Macabre. I noticed solid and raw bass lines, sometimes reminding me of earlier X Marks The Pedwalk, but still cool body-pop cuts. “Three” reveals harmony between the band’s influences.

– – – : I noticed an industrial-, evil-pop aspect on their previous album, which is a bit gone on “Three”. That’s my single regret as it made the sound more personal.

Conclusion: Globally speaking I can’t affirm that “Three” is a real ‘master’-album although it’s fully enjoyable and diversified because of the constant mix between pop and EBM. This band is missing a real ‘hit’ to get a bit more in the spotlights.