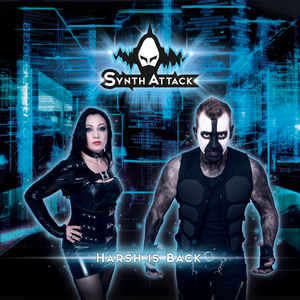 Content: The sound formula hasn’t changed. Driven by pumping kicks, carrying melody lines, aggrotech sequences and harsh produced vocals “Harsh Is Black” will take you on a murderous dance-ride. The songs are pretty similar and clearly composed for the dancefloor.

+ + + : If you like dark-danceable underground electronics, “Harsh Is Back” will definitely become a praised album. SynthAttack has found this secret formula to get people dancing. Music can be simple and yet very efficient. The secret of SynthAttack is the perfect osmosis between hard, pumping beats, elevating melody lines and harsh vocals of the ‘commander’. I’ve a preference for the title song and “The Beauty Of Violence” while there also is a noticeable cut composed together with Suppressor.

Among the remixes I recommend the work accomplished by [X] -RX, Alien Vampires and Sindikhate.

– – – : The songs are pretty similar; there’s no real innovation. The lyrics clearly aren’t the main topic of SynthAttack. The texts are totally cliché, but simply made to keep in mind and get some rhymes.

Conclusion: SynthAttack is a kind of dance-ogre and for sure a band DJ’s will play for the greatest pleasure of the clubbers.

Best songs: “The Beauty Of Violence”, “Unleash The Beat vs. Suppressor”, “Harsh Is Back”, Life Is A Bitch”, “Life Is A Bitch – Sindikhate Rmx”.