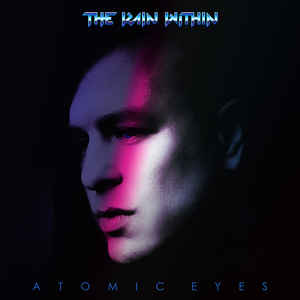 Background/Info: After a self-released album (cf. “Pain Management”) released in 2010, The Rain within had to wait till 2016 to release its first official album entitled “Dark Drive” on Negative Gain Productions. Two years later we welcome the new album by this American formation driven by Andy Deane.

Content: Deane claims to be inspired by 80s music and horror movies and that’s an element you’ll recognize quite rapidly. The sound is pretty vintage-like, but the global production has something very 80s. From melancholic electro-synth music to melodic passages plus cool electronic effects “Atomic Eyes” will rapidly bring you back in time. This album is pure electro-pop.

+ + + : The retro feeling is not exactly the most original one, but it sounds cool and refreshing. I especially like the multiple little effects, which are lie little details, but probably the closest 80s element from the work. The vocals are quite passionate. The album is nicely going around while the last songs definitely are worth to listen to. We here get the best from this nostalgic-like production. Great bass lines and cool melody lines will definitely convince you.

– – – : The songs –and especially in the first part of the album, are pretty similar and predictable after a while.

Conclusion: This album has two sides; the first one which sounds retro-like, entertaining, but a little bit boring after a while and a second side, which stands for a great final part revealing more exciting and elaborated songs.

Best songs: “Midnight”, “While I Am Here”, “Small Precious Lights”, “Like The Devil”.

Tags: The Rain Within