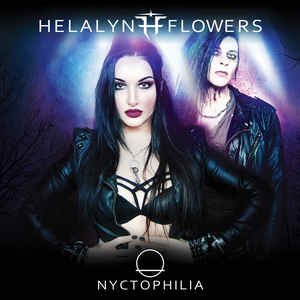 Background/Info: The Italian duo Maxx and Noemi strikes back with the 5th full length album from their Helalyn Flowers sonic brainchild. They’ve always merged electronics and guitar, but since the previous album “Sonic Foundation” they clearly revealed an interest in hard-pop music.

Content: The EP “Kamikaze Angel” already was a solid teaser to this new work. Sonic operator Maxx moves on torturing electronic sounds he mixes with hard guitar riffs. It remains a powerful outburst, which has been again polished with catchy pop tunes and leads. On top of “Nyctophilia” reigns the charisma of Noemi who’s singing with passion.

Next to the regular album featuring 10 songs the limited edition brings you an extra disc with 12 cuts. This is the right place for remixes and alternative mixes. The job has been done by Blue Hour, The Synthetic Dream Foundation, In Black Lights, Alien Nation, People Theatre, Jen Ascending and Lis Van Den Akker, Wasserkraft Manifest plus a few remixes by the band itself. Last, but not least there also is a song featuring ImJudas (solo side-project of Maxx).

+ + + : I can say without hesitation that Helalyn Flowers is a band with a real personal sound. It’s not that new to bring guitar and electronics together, but they do it their own way. The sound is hard to define rather than the result of an impressive mix of influences. It sounds definitely electronic and injected with metal guitar riffs. It creates a rough and powerful sound, which has been finally refined by electro-pop arrangements. The work remains dark and hard, but fully accessible. It’s also fascinating to see how this band progressively evolved in sound to finally reach the ultimate stadium of sonic chemistry. Noemi also is a great and talented singer. She brings passion and emotion, power and sensuality. “Nyctophilia” is a real outstanding piece of work with not any single track to throw away.

Among the remixes I want to mention the irresistible “Club Mix” of “Nyctophilia” and the “Deep Reality Mix” of “Let Me In”. One more noticeable song is “Beyond” featuring ImJudas.

– – – : I can’t imagine any minus point about the regular album, which is without a shadow of a doubt the best Helalyn Flowers-opus in history. I expected a bit more from the remixes by other bands. The best tracks here again remain the ones by Helalyn Flowers so why not consider a next album with only remixes by themselves!?

Conclusion: There where successful bands are often stagnating, Helalyn Flowers never stops. “Nyctophilia” is an invitation to dive together with the band into the darkest and most powerful sides of futuristic-pop music.

The Truth Behind Organic Vape Juice