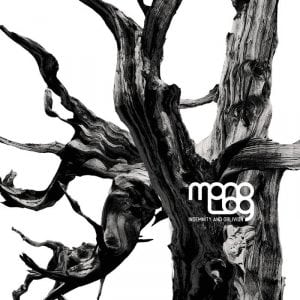 Background/Info: Hailing from Denmark Mads Lindgren is based in Berlin (Germany). Monolog released a considerable amount of productions during the past few years. You might know him from the Ad Noiseam roster while he now strikes back on Hymen. The title of the work refers to ‘an act of parliament in England, a general pardon for anyone who had committed crimes during the civil war and interregnum’.

Content: Behind this work and its title seems to hide a very personal release and a kind of exposure to chase inner feelings of pain and loss. It has been transposed into a tough sonic exposure characterized by heavy metal guitar assaults and broken rhythms. Metal meets breakcore and got finally joined by industrial music. The tracks are complex and dynamic.

+ + + : Monolog remains a true sound anarchist. This is an artist who’s just doing his very own thing without following trends and easy industrial loops. It remains a challenge and that’s an aspect I’ve always supported in music. Monolog is atypical and resulting from a creative process. The album makes me think of a sonic labyrinth.

– – – : The biggest challenge for such a producer is to catch the attention of an audience. It’s not exactly the most accessible kind of music and yet it has enough elements to please.

Conclusion: Monolog is a sonic bridge between several music genres, but you sometimes get the impression that the bridge is suddenly collapsing. Experimental releases remain the biggest challenges and even if I’m not totally seduced by this creative process I’ve to admit that Monolog is moving on releasing its weird sounds and noises.

Since you’re here … … we have a small favour to ask. More people are reading Side-Line Magazine than ever but advertising revenues across the media are falling fast. And unlike many news organisations, we haven’t put up a paywall – we want to keep our journalism as open as we can. So you can see why we need to ask for your help. Side-Line’s independent journalism takes a lot of time, money and hard work to produce. But we do it because we want to push the artists we like and who are equally fighting to survive. If everyone who reads our reporting, who likes it, helps fund it, our future would be much more secure. For as little as 5 US$, you can support Side-Line Magazine – and it only takes a minute. Thank you. The donations are safely powered by Paypal.
Tags: Berlin, Monolog