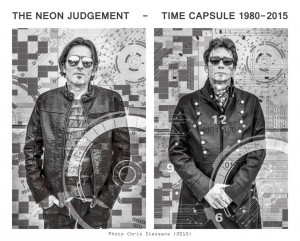 No doubt about it, The Neon Judgement has been one of the absolute pioneers and leading formations in history of electronic underground music. After 35 years of commitment Dirk Da Davo and TB Frank decided to leave their sonic brainchild to the collective memory of their numerous fans and electro lovers. They can look back at an impressive career and multiple hits. Enough reasons after the ‘TNJ Farewell Tour – Time Capsule Concerts’ for a ‘farewell interview’.

Part 2 can be read here.

SL: The Neon Judgement got a symbolic funeral during the very last live show at the ‘AB’ in Brussels on September, the 26th. What did you feel during the show?

Dirk Da Davo: The AB is the ultimate place to do this. We were comfortable on stage, we’ve enjoyed it very much!

SL: Where’s The Neon Judgement now: in heaven or in hell?

Dirk Da Davo: TNJ is in between both…

SL: If you’ve to choose an epitaph for The Neon Judgement, what should we read on it?

SL: Does the famous quote ‘death is only the beginning’ make sense to you and if yes what do you expect?

Dirk Da Davo: That the beginning is always very near.

SL: Robbespierre is probably not a ‘pacific’ reference, but he made this remarkable quote ‘death is the beginning of immortality’! Do you think The Neon Judgement will be immortal and how would you like to be reminded as band and musician?

Dirk Da Davo: Let’s hope that the message stays immortal. Hard to tell how I would like to be reminded as a musician because I still am a musician…

SL: I guess you prefer a quote by George Orwell; I’ve found this one: ‘each generation imagines itself to be more intelligent than the one that went before it, and wiser than the one that comes after it’. What do you think?

Dirk Da Davo: The quote means ‘the end at the end’. It seems that society evolves like this :(( War is peace, freedom is slavery, ignorance is strength!

SL: THE George Orwell quote remains for sure ‘Big brother is watching you’! How the hell could he know one day it simply would become reality?

SL: A few other writers, which I think might have caught your interest are Anthony Burgess for “Clockwork Orange” and Aldous Huxley for “Brave New World”. Or do you have other references?

SL: Now that The Neon Judgement is death and buried, you’ll maybe get the opportunity to meet George Orwell in afterlife! What would you like to ask him?

Dirk Da Davo: Hi Georges, can I offer you a drink?

SL: Who are the other personalities you would like to meet in hell or in heaven?