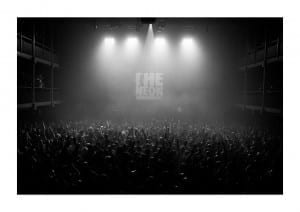 No doubt about it, The Neon Judgement has been one of the absolute pioneers and leading formations in history of electronic underground music. After 35 years of commitment Dirk Da Davo and TB Frank decided to leave their sonic brainchild to the collective memory of their numerous fans and electro lovers. They can look back at an impressive career and multiple hits. Enough reasons after the ‘TNJ Farewell Tour – Time Capsule Concerts’ for a ‘farewell interview’.

Part 1 can be read here.

SL: Who would you like to invite for a jam session in hell: Ian Curtis, Sid Vicious or Frank Tovey? Someone else?

SL: An interesting subject you’ve often threatened about is the impact and influence of media! How do you look at the media as a citizen and as an artist who was involved into a famous band?

Dirk Da Davo: The media / TV has overtaken the emotions of people for pure commercial reasons. And people do not notice it. That’s just scary 🙁 I look at this as both, a citizen/ a artist. The text for “TV Treated”?

Dirk Da Davo: Even in 2015 I have released a new Neon Electronics album! So I will qualify the decades when I’m done with creating new music…

SL: Did you had a kind of relation- and/or friendship with this other famous Belgian pioneer: Front 242? Did you überhaupt made some friends in the music business or is it just fake?

Dirk Da Davo: Especially the latest decades we got closer with the other bands, yes. It feels good. We feel that we are united in something special. So between musicians we are friends. Friends in the music business is another question.

SL: Music is often represented as ‘sex, drugs & rock’n’roll’! What do you recognize from The Neon Judgement in this statement?

Dirk Da Davo: I don’t want my mother to read this, still not!

SL: Any idea how many songs you’ve written, how many concerts you did and how vinyls/CD’s you’ve sold?

Dirk Da Davo: No, I will think about that just before I quit music.