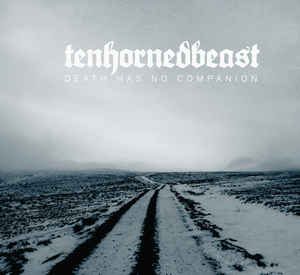 Background/Info: In a previous life Christopher Walton was involved in the ritual project Endvra. He later on set up TenHornedBeast, which became a rather instant successful project in its genre. This new opus reveals three long during cuts.

Content: TenHornedBeast composes the kind of music you better get familiar with before trying “Death Has No Companion”. It’s an icy, obscure composition leading the listeners throughout endless sonic corridors. Gongs and drones are resonating throughout the imaginary walls of this cellar music while obscure atmospheres create an anguishing visual appeal.

+ + + : The tracks have been meticulously built up. The repetitive sound waves are accentuating a kind of countdown leading you towards an imaginary exit… or the gate of afterlife. “Death has No Companion” is an antidote to ‘feel-good’ music, but still a relief if you get nervous of sweet, sugar-like music tunes. TenHornedBeast stands for a sonic apocalypse, which has been fully accomplished on the debut cut “The Wanderer”.

– – – : I think this album sounds pretty cool, but it’s only missing a truly climax. Even if the cuts have been meticulously built up, they slowly starts to get a little bit monotonous at the end.

Conclusion: TenHornedBeast is a sonic ogre, which will bring you terror and fright. “Death Has No Companion” sounds such as the icy blast of death.

Since you’re here … … we have a small favour to ask. More people are reading Side-Line Magazine than ever but advertising revenues across the media are falling fast. And unlike many news organisations, we haven’t put up a paywall – we want to keep our journalism as open as we can. So you can see why we need to ask for your help. Side-Line’s independent journalism takes a lot of time, money and hard work to produce. But we do it because we want to push the artists we like and who are equally fighting to survive. If everyone who reads our reporting, who likes it, helps fund it, our future would be much more secure. For as little as 5 US$, you can support Side-Line Magazine – and it only takes a minute. Thank you. The donations are safely powered by Paypal.
Tags: Ogre, TenHornedBeast, terror