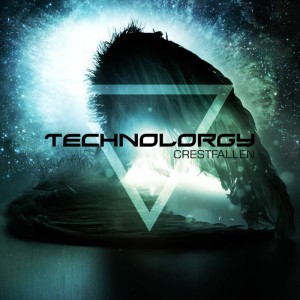 Content: Is Technolorgy one of the best kept secrets of the Greek electro underground scene? Technolorgy has been set up by Dav1d (Vocals) and Lau (machines) and has already released a debut album (“Endtimes In Vogue”) back in 2012.

“Crestfallen” is a digital only release, which comes as a teaser to announce the new album “Dying Stars”. The title song is a somewhat dreamy piece of EBM-driven music with a chorus featuring a harsh power-pop element on top. The song sounds fresh and miles away from the distorted noise standards. That’s an element, which comes through in the production of the vocals as well. Dav1d doesn’t sing like he’s possessed, but rather in a powerful and clear way.

Two great names have been asked to accomplish a remix. The remix by Soman is my favorite one for having elaborated some parts of the song while a beautiful synth layer hangs over the production.

Rotersand did a noticeable remix as well, on which you’ll perceive all the sound intelligence of this band. This remix is not as pumping, but more like respecting the original version with an extra pop accentuation on top.

Last, but not least we also get an exclusive b-side song called “City Of Fallen Angels”. These is a quiet and piano-played song adding a wafting and prosper aspect to the work.

Conclusion: “Crestfallen” sounds not as an absolute potential hit for clubs and DJ’s, but it’s a pleasant song. The Soman remix has the power to conquer the clubs.