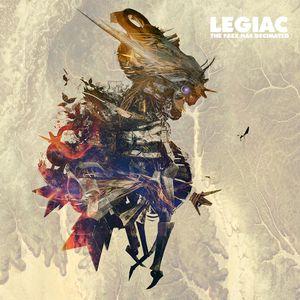 Content: Legiac was set up began in 2007 as a collaboration of Don and Roel Funcken (Funckarma, Quench) and Cor Bolten (Dif:use). The album “Ming Feaner” got released on Sending Orbs, but nothing new was released since then.

“The Faex Has Decimated” sounds like a comeback and a new beginning for Legiac. The album was composed by Roel Funcken and Cor Bolton resulting in 13 tracks. The sound of this band often moves in between the subtlety of IDM and dubstep rhythms. There also is an evasive and astral mood in most of the songs. The songs have been composed with an impressive arsenal of mainly analog, but some digital equipment as well. The strength of the work can be found in the multiple brilliant sound treatments, which are often characterized in heavy sound blasts, great sweeps, minimal electro arrangements and other icy manipulations.

This album stands for a sophisticated writing and a deeply ambient exposure. The complex structures are very accessible and will progressively push you to enter a fictive visionary universe. Some passages are pure reverie while a few other cuts reveal a more bombastic and heavier approach. Many influences can be noticed and some parts move into industrial and minimal-like sound manipulations. One of the strongest cuts in the genre is “Row Glodation”.

The IDM inspiration comes through on the title song and “Savastopol’s Nexus”, which both reveal overwhelming and deep vibrating sound blasts. This is the kind of music which will also appeal for dubstep lovers, but sounds darker and more industrial, which makes the originality of the work.

This is the kind of album you have to listen to several times and each time you’ll discover new elements, like little hidden manipulations and other studio effects recovering the sounds with a cold texture. The ambient element makes it all warmer and more accessible, like transposing some passages into an elevating dimension.

It feels good to see this band reactivated and their comeback is total lust for the ears.

Conclusion: An album revealing a true passion for sound creation, which has been worked out into a highly intelligent format of electronics. This is just one more great release from the Tympanik Audio roster, which remains one of the main sources and references when it comes to IDM, electro-industrial and related genres.