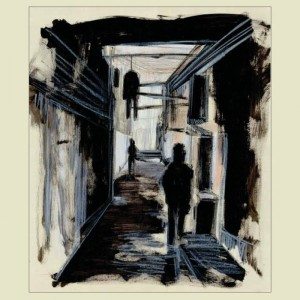 Background/Info: The Rain And The Sidewalk is mainly a solo-project driven by Trevor M. Thompson. I honestly can’t remember to have ever heard of this Vancouver-based (Canada) multi-instrumentalist who already released a few earlier productions on which he sometimes invited guest singers like on the cool indie-pop driven “Stuck”-EP. This new album is mainly available at digital platforms, but a few CD-copies are available as well.

Content: After I’ve heard the “Stuck”-EP (2011) I was rather confident to discover a new entertaining indie-pop driven work. “Nadir” has less in common with this previous work and rather sounds as an exploration of new-wave and rock music with some extra influences on top. The point is that the work rapidly becomes versatile now moving into post-punk and even metal fields and later on experimenting with a kind of shoegaze-ballads.

The work clearly reflects dark elements and themes of sadness. One of the main elements is the male vocals by Trevor M. Thompson and that’s a radical change with previous work I heard which featured female guest singers. This album however reveals a few songs with guest musicians and singers as well.

+ + + : Diversity often is the best remedy to avoid monotony and that’s for sure an aspect I appreciate on “Nadir”. One of the best cuts is the more into ‘happy’ rock sounding “Driftwood” reminding me of bands like The Housemartins.

– – – : I for sure like the diversity of “Nadir”, but unfortunately the different influences can’t convince me. It all sounds unaccomplished and globally speaking under-produced. One of the major elements is the vocals, which are less passionate and simply insufficient.

Conclusion: Sometimes you win, sometimes you lose… I’m afraid “Nadir” is not exactly an album that will enter into the collective mind of dark underground music freaks.

Tags: The Rain And The Sidewalk