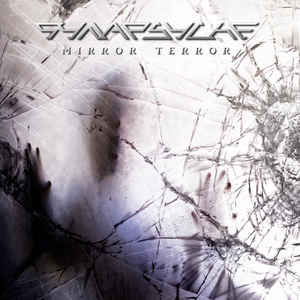 Background/Info: Set up in 2008 Italian duo Stefano ‘Mannequinetik’ (machines) and Marco ‘Katatronik’ Mantovani (vox) joined hands with Alfa Matrix to unleash their third full length album. After a first self-released opus and a second album (cf. “The Abyss Effect”) released in 2016 on SkyQode, this EP serves as teaser to the announced “In Praise Of Folly”.

Content: The EP features 2 new songs plus 7 remixes. Synapsyche moves on dealing with dark and bouncing dancefloor electronics. Hard kicks, cold trance leads and harsh vocals remain the main ingredients of their sound. The rough and unpolished approach reminds me once again of early Combichrist.

+ + + : Synapsyche has released the right EP to introduce their next album, but also their sound to all of those who never heard of them before. It’s a dark, aggressive and I should say ‘classical’ dark-electro format made for the dancefloors. The main song “Mirror Terror” is an accomplished piece of music, which will incite you to dance. Among the remixes I would recommend Neikka RPM (for their very unique sound DNA), Eggvn (an interesting and unfamiliar name to discover) and H.O.W. (another less familiar band) for their ultra-hard remix. The remixes bring a little extra and I especially like the diversity of the bands and also the less famous names featured here.

– – – : I can’t get away from the idea that there numerous bands in the Synapsyche-style. They don’t bring anything new –except dealing with cool and clubby ‘endzeit-electronics’, but they’ve been the lucky ones to become one of Alfa Matrix newest signings.

Conclusion: Let’s wait for the announced album to really get an idea about this band’s maturity and evolution in sound. This EP is an interesting production, which will easily finds its way to dancefloors.