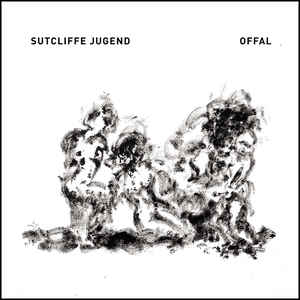 Background/Info: Sutcliffe Jugend aka Kevin Tomkins and Paul Taylor belong to the pioneers of an avant-garde industrial sound. It’s a sonic trip that took off during the early 80s. The British duo is now back on track and 2016 seems to be a prolific year as they’ve released different albums on different labels.

Content: “Offal” reveals for long-duration cuts, which directly bring the listener into the half-industrial and half-noise universe of the duo. Taylor manipulates and experiments with sounds and guitar, creating noise loops on, which Tomkins is singing. This is not the usual and familiar way of singing, but a kind of enraged and tormenting format. It sounds a bit like a reflection of a psychotic mind or an insane universe wherein a poor mortal soul starts to question himself. It creates a totally mad production, which moves quite progressively into more noise-orientated fields resulting in a kind of apotheosis created by an imaginary noise rotor merged with half screaming vocals and resonating, industrial drones.

+ + + : The work reveals a dangerous fusion between tormenting noise parts and weird vocal parts. This album reflects a great and possessed production, but once again a totally avant-garde piece of music, which mixes different influences.

– – – : The tracks are sometimes a bit too similar in their global formula. The experimental format is not always the most accessible one. Sutcliffe Jugend clearly has the sound for a selected audience.

Conclusion: “Offal” is an apocalyptic vision, but still a solid sonic bridge between industrial standards and noise.