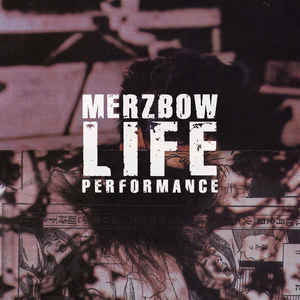 Background/Info: Masami Akita is the one and only ‘King’ of Japanese noise. He’s one of those visionary, but also extreme artists who give a new orientation to industrial music by the creation of noises. It’s a kind of anti-music creation or at least an antidote to what we commonly call ‘music’. This album is not a live album as it was recorded in Merzbow’s own studio. It’s a reissue of an extremely rare tape that was released in 1985! The cassette was originally released on ZSF Produkt (label of Merzbow) and in France on Le Syndicat.

Content: The work features 5 tracks, which move in between typical Merzbow-noise and softer compositions with an industrial aspect on touch. You get a mix between heavy noise loops and industrial sequences. It all sounds like an extreme sonic collage with some extra spoken samplings on top.

There’s a familiar kind of noise anarchy and it often sounds like a big improvisation, but Akita always has this feeling to accomplish his work by tormenting sound treatments and dark atmospheres.

+ + + : You really have to be a noise addict to enjoy this kind of work, but one thing is for sure, Merzbow is a real genius in his work. I like the diversity of this album, which more than 30 years after its original composition still sounds like it was composed today.

– – – : Like with most of the releases in the genre I sometimes miss some coherence and structure, but that’s also the essence of noise!