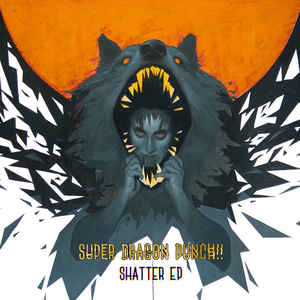 Background/Info: Super Dragon Punch!! Is a Belgian project set up and driven by Jérémie Venganza. This artist is already busy with music for numerous years and has been previously involved with RANkOR. “Shatter” is the official debut of Super Dragon Punch!! who claims to be inspired by ‘retro gaming and 80s synths’.

Content: This EP features 4 songs and 4 remixes. The sound is raw and somewhat polished during the choruses. The composition is a weird, but efficient electronic punk-pop fusion. I also noticed some technoid arrangements. The vocals match the punk-pop approach.

Remixes were made by Assemblage 23, Terrolokaust, Iszoloscope and WoTTw. Notice by the way Venganza didn’t spare any effort to bring his work to a higher level, asking Krischan Wesenberg to mix and master the songs.

+ + + : Even if I already heard a lot of good reactions about Super Dragon Punch!! I was really wondering how this EP would sound. I discovered a well-crafted and elaborated composition, which is for sure danceable, but especially dealing with an interesting symbiosis between pop and punk. It’s not that easy to really seize and define the sound of this band, but it definitely is an interesting approach. Super Dragon Punch!! is not a copyist and avoids reinventing old-standards such as future-pop. The remixes have been made by an interesting selection of artists dealing with very different electronic formats. I especially recommend the Assemblage 23 remix of “Inspire”, which is more efficient than the original version. Terrolokaust did a great job as well. The remixes are quite club orientated and that’s what we might expect from an EP. Last, but not least I also want to say a word about the digipak format revealing the ambition of this artist.

– – – : This EP serves as a solid basis to go on with. I think there are some elements of the composition (like melody lines) which can be more elaborated while the production of the vocals can be better as well. But globally speaking this is an interesting debut!

Conclusion: This EP reveals an interesting approach in electronic underground music. It’s the kind of sound that will not appeal for one specific audience and that might be the strength of Super Dragon Punch!!