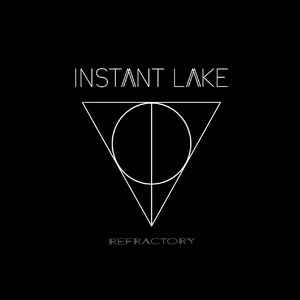 Background/Info: Instant Lake is an Italian formation active since 2015. After some online releases “Refractory” is the official debut album for the band, which has been released on the Brazilian label Wave Records and distributed in Europe by Danse Macabre.

Content: Instant Lake brings us back to the 80s new-wave music. The songs have been composed by guitar and icy strings, which sometimes remind me me of early Neon Judgement. This work sounds in the purest tradition of cold and obscure new-wave. The tracks are moody and sometimes a bit into melancholia. The final song is a little bit different for being driven by a harder kick and reflecting a different approach in sound.

+ + + : If you’re into the spirit of new-wave music, “Refractory” definitely is an album to discover. It’s a perfect emulation of 80s music revealing well-crafted song structures and an efficient twist between guitar and electronics. Both opening cuts are really efficient and will for sure awaken good-old souvenirs by numerous ‘older’ listeners.

– – – : Even if I’m convinced about the potential of this band the album however misses a real climax. Both opening tracks are great, but the six tracks left are a little less stagnating. I’m missing this little, but essential details to speak about a fully successful debut.

Conclusion: Instant Lake doesn’t innovate, but clearly deals with an interesting 80s inspired composition. This is a band to keep an eye on, but they now have to improve some aspects of their composition.